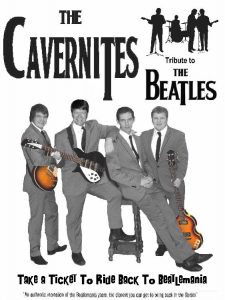 The Cavernites are a professional Four piece Beatles tribute band from Liverpool, who perform a tribute show that recreates the vibrant sounds of The Beatles touring years 1966.
The Cavernites bring the sound and look of The Beatles back to life, and up to date musically taking the audience on a Magical Musical History Tour, through One of the greatest musical decades of all time

The Cavernites perform completely live, performing a recreation of The Beatles live not copying their recorded works but presenting their on stage live performances, presenting an energetic, vibrant show, recreating the atmosphere and power of a live Beatles concert.

The Cavernites use original instruments from the period, names like Rickenbacker, Epiphone, Gibson and Fender together with a Ludwig drum kit, they also use original amplifiers, names such as Marshal, Fender and Vox. The Beatles look is completed by the use of original stage clothes.

The Cavernites are more than just a tribute show, it’s the closest you can get to going back to Beatlemania!. 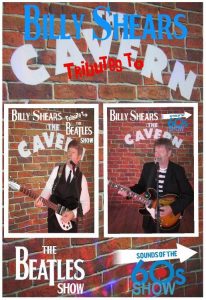 “Billy Shear’s takes the audience on a musical history tour through the Sounds of The Sixties from Liverpool to London and beyond.

Encompassing all the major bands that made the Sixties, from The Beatles, The Swinging Blue Jeans, The Searchers, Gerry and The Pacemakers, The Who, The Rolling Stones, The Small Faces, Manfred Mann, The Kinks, The Troggs the show is full of maximum Sixties beat.

Fully costumed in authentic Sixties clothing using original instruments, both electric and acoustic, the shows are available in two formats a pure acoustic version or complete with specially
recorded backing with live guitar or a mix of both Billy Shears presents his ‘Sounds of The Sixties’ show and a full solo ‘Tribute to The Beatles’ show.

“Be My Baby” – swinging sixties tribute show designed to take you on a trip down memory lane.

All your 60’s favourites jam packed in to one outstanding performance by professional cabaret singer and entertainer Babette.

With her energetic, fun and quirky performance style Babette will have you up dancing in no time, not to mention have you singing along. With a stunning vocal talent and large repertoire of 60’s classics this
show includes hits from Lulu, Martha & The Vandellas, Dusty Springfield, Stevie Wonder, Cilla Black, The Beatles, The Ronettes, Dirty Dancing and many more….

Available as a solo act with dazzling 60’s costume changes or with an additional two professional dancers performing choreographed dance routines along side. This act is the perfect addition to your Themed Night, Party, Corporate Event, Function, Wedding or Event. Guaranteed to give your guests an unforgettable evening of entertainment.