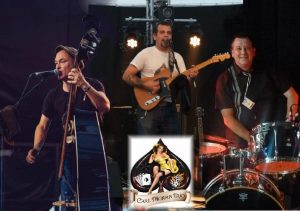 Started in September 2012, the original line up consisted of Carl Morris on Lead Guitar and Lead Vocals, Keefy Nics, on Drums and backing vocals and Pete Bailey on Double bass and Vocals.

They played their first gig at Torpoint Gardens In November 2012.

In December 2012 bass player, Pete Bailey, left the trio due to a conflict of interests and the trio took time out to reconsider what direction to go in whilst searching for the right person to take the helm on Bass.

In March 2013 their search was over with the acquisition of Keef’s fellow Black Diamonds Band Member, “Big Charlie”. after a 4 hr practice session it was agreed that he would fill the post full time and the trio returned to the scene of their first gig to relaunch with the new line up, although the real party was to be found at their second gig, The following day, at The ship Inn, Polperro.

The Trio now can be found playing in pubs and clubs and Festivals all over Britain and Overseas. 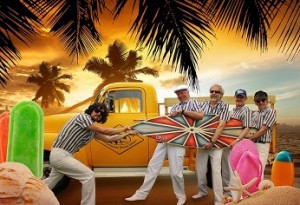 To create a truly believable and memorable tribute act, both vocal and instrumental sounds must be replicated to the finest detail. It is this attention to detail that have made The Beach Boys Band the popular attraction they are today.

The 5 members of the band share a passion for the Beach Boys Music, delivering songs that everyone knows and loves. The boys deliver a live performance that reflects both their enthusiasm for their work and mastery of a genre of music that is generally accepted as being both complicated and difficult to perform live.

With options of 1 x 45 minute – one hour or 2 x 45 mins shows which feature hits such as “Good Vibrations, God Only Knows, Wouldn’t it be nice and many more.

The show is not just a procession of songs, presented in narrative form it provides the audience with a fascinating insight into the history of the biggest vocal harmony pop band of a generation.